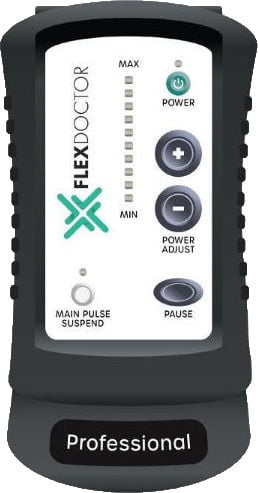 At the 1992 AMTA National Conference which that year was held in Chicago, near the home office of AMTA, I met the inventor of what was then called Therastim, Gary Thomas, and his partner Dennis Thompson in the trade show.

ARP Manufacturing Inventor of ARP Technology: Gary Thomas had over thirty-five years of experience in the medical field. He holds a degree from Purdue University in Pharmacal Sciences.

Gary became an expert in medical electronics, inventing and developing what was to become the ARP Trainer.

With a fundamental grounding in physiology, chemistry and electronics, Mr. Thomas was in a unique position to concentrate on the physiology and dynamics of electromagnetic stimulation and the resultant chemical reactions in the human body.

During the development of ARP electronics Mr. Thomas built on and extended the pioneering work of Dr. Yakov Kots, a Russian neurophysiologist.

Gary is well into his 80’s and still works in the manufacturing near his home in Colorado.
Dennis Thompson established the business office in what was his hometown of Apple Valley MN.
Colt Thompson, Dennis’s son is who I generally communicate with via text, phone, and email.
Colt is really quick. If he doesn’t answer, I usually know it was something I could have found on my own, and then like clockwork, I find my answer.
Dennis has since moved to the warmer climate near Pheonix AZ which is also where Frank Jay Schroeder
developer of Ultra Fit and EvoSport: lives and much of the protocols for high performance athletes has been heavily influenced by Jay Schroeder.
He has designed unique protocols for use with the ARP as well as the typical equipment in the gym setting, as they relate to rehab strength, injury prevention and elite athletic mastery.

Michelle entered her consultation very skeptical of the treatment but after experiencing it herself, all her skepticism was gone.
After her consultation and initial treatment Michelle was able to walk without having to use her cane and could also get up and down from her chair on her own. Feeling this great, her entire outlook changed.
With the chance to return back to her normal lifestyle and overcome this arthritis pain, Michelle jumped right into an ARPwave protocol. Achieving 100% output on nearly every single exercise performed!
Throughout the treatment a tremendous amount of progress took place. Arthritis and joint pain had diminished to nearly nothing. No longer having to take pain medications daily.
Her strength and energy returned. Allowing her to not only return to tasks she once took for granted like cleaning the house, sleeping, walking, jumping and exercising but maybe most importantly, she was able to return back to being her son’s biggest supporter. Thanks to ARPwave Michelle never misses a game.Below is the San Antonio TX YouTube collection.

This site uses Akismet to reduce spam. Learn how your comment data is processed.